Antonin Dvorak was reticent about the New World.

Already a well-known composer in Europe when he took over the directorship of the American National Conservatory of Music, Dvorak tsailed from Prague and disembarked in Hoboken, New Jersey on September 27, 1892. Initially, he was awed by the sprawling rush of urban life–his arrival coincided with the festivities surrounding the 400th anniversary of Columbus’s New World docking. “Great and magnificent” was how he described his new city. In a quiet neighborhood on East 17th St., Dvorak began sketching his last symphony. 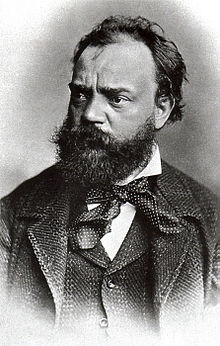 Once completed, it was billed in advertisements as evoking “wide open spaces”–an ironic phrase since Dvorak was horrified of them. The Ninth Symphony (“From the New World”) premiered on December 16, 1893. Audiences were enthralled. The composer was hailed as creating a distinctively American sound. 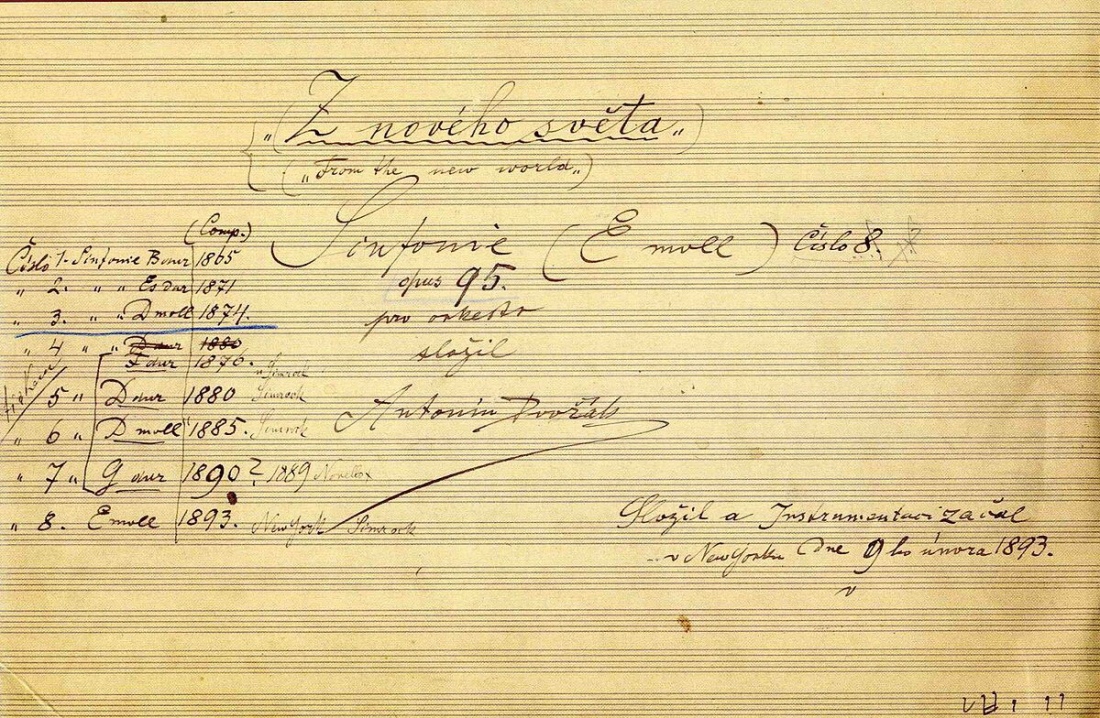 His experience with indigenous Americans, however, was pretty much restricted to watching some traveling Iroquois put on an exhibition in Prague some 20 years earlier. Another influence, strange as it sounds, was Buffalo Bill’s Wild West Show. As was Longfellow’s 1855 The Song of Hiawatha, which Dvorak wanted to make into a symphonic poem but never finished. Like most white visitors, Dvorak’s view of America was largely expropriatory.

Harry Burleigh, one of his African American students–and later a composer in his own right–introduced the composer to spirituals, leading the latter to contend that African American folk songs would be the basis for a national musical heritage, proving apposite when jazz came along. Notwithstanding his soaking up of second-hand Americana, “From the New World” is very much a product of late-Romantic music theory.

The mood of America, though, pieces the international melodies into an adventitious American composition. An opening minor-key horn solo gives way to an expansive theme that recurs with differing modalities, and its something like listening to a European’s impression of America from a train-car. As it happens, Dvorak was obsessed with railroads, keeping fastidious timetables.

Discovery and longing are twin atmospheres in the symphony. In the Largo‘s intensely tender, almost painfully homesick English horn motif the feeling is tangible, with the first movement’s themes brought into a gently sad harmony.

After an initial burst of Jaws-like strings in the final movement, the preceding melodies are brought into synchrony with inventive variations. Here, the haunting notes of the Largo return in a slower, almost wary lead-up to the hurtling major-key finale. Fittingly enough, the bittersweet horn rounds out the last note of the symphony.

It’s an ambivalent vision of America, and at certain points a bleak one even. Innocence, expectation, transformation, yearning–the 9th is a Brahmsian traversal, with touches of Brucknerian brass, of the New World and Dvorak’s pining for Bohemia. A more modern, Americanized sense of dread roils just out of reach.

There are dozens of fine recordings of Dvorak’s autobiographical paean to America. Rafael Kubelik and the Berliner Philharmoniker ranks among the best and is probably the most faithful to Dvorak’s score.

A quieter performance comes from the Czech Philharmonic Orchestra under the baton of Karel Ancerl.

Istvan Kertesz’s lively conducting of the 9th, included in a 1960s symphonic cycle for Decca, is considered a classic.

But for sheer propulsive power, none equal Arturo Toscanini’s 1953 studio recording. Definitely not the most sensitive or naturalistic, his direction is a headlong dive into the velocities of Dvorak’s New World.

Toscanini, by all accounts, was a difficult man. He was known for pushing his players to their limits with endless rehearsals. A perfectionist par excellence, he was a maniac on the podium, flailing wildly and muttering to himself under an Old World tailored mustache, resembling something like a hybrid of Charlie Chaplin from Monsieur Verdoux and Daniel-Day Lewis.

He was classical music’s first superstar conductor,  with a flair for the dramatic, whose performances on radio and television were viewed and listened to by thousands. His was literally the face of conducting: few people outside of an orchestra had ever seen a conductor’s expressions mid- performance. And what expressions they were.

Toscanini’s anti-Mussolini views made Italy a dangerous place to remain, so he emigrated, just like Dvorak, to NYC. Toscanini’s reputation preceded him; on arrival in 1937 he was supplied with his own hand-picked orchestra and a private studio. Soon, the hyper-charged conductor rampaged through the classical repertoire, rattling off Beethoven cycles, staging Wagner and Verdi, and generally, if you happened to be one of his musicians, being nearly insufferable.

Whether he was a great conductor or not has been a matter of debate, but what’s not in question is that his Dvorak Ninth is pretty exhilarating. Recorded at the NBC studio and subsequently re-issued many times, it displays Toscanini’s ridiculously keen sense of rhythm and tempo, notably in the 4th movement. His approach is practically staccato, an unapologetically brash interpretation that maximizes the symphony’s raw edges and conflicted feelings about the New World. Every bar is as chiseled as Mount Rushmore, with a momentum that channels Dvorak’s love of locomotives. It’s a view of America through the prism of two immigrants navigating its sometimes sweet, often furious noise.