You have to love Deutsche Grammophon for continuing to issue their new releases on 180g vinyl–possibly the last classical music label to do so. Here, they reunite with Krystian Zimerman after a 20-year hiatus from solo recordings (his previous one was Debussy’s Preludes I and II in 1994). Zimerman’s playing, as usual, is as sensitive as wind on a mercurial midnight ocean.

That ocean is Franz Schubert’s last two piano sonatas. One minute sweet and calm, the next a full-on storm threatening to become a monsoon. Completed, along with No. 19, in a ridiculously short time in 1828, the sonatas are possibly the best inkling of the composer’s Sturm und Drang mindset, with passages of barely contained turmoil coiled in the most melodic of melodies.

Schubert’s solo and chamber pieces are marked by lyricism and turmoil. Subtle key changes and dark effects (the growling trill that interrupts the ponderous opening theme of the D960 sonata) were Schubert’s forte. Nowhere is that more pronounced than in the andantino from the D959 Sonata, which starts in a fragmented melancholy and soon breaks loose from all sanity in a spasm of runs, flourishes and trills. 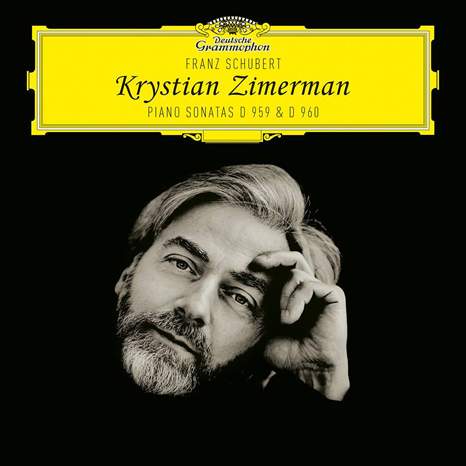 Zimerman’s is an eloquent, polished recording; he is, after all, a pianist’s pianist. His one-of-a-kind sound (the result of his having built by hand a keyboard for his Steinway) is nothing short of velvety. No one sounds remotely like Zimerman. Because he forgoes all the emotional explosions and abrupt shifts of other pianists, his Schubert is ironically one of the least conventional.

In the molto moderato, with its hints of menace, that opens the D960 Sonata Zimerman’s playing is transcendent (he includes the repeats that some performers choose not to record), handling the abrupt shifts and key changes with exquisite proportionality. And his pellucid, absolutely controlled playing reigns throughout both sonatas. Compared to Alfred Brendel’s somewhat staid rendering on the one hand, and Valery Afanassiev’s slow descent into a hellish maelstrom on the other, Zimerman charts his own fastidious path.

Any inkling to overdramatize is fully contained in an impressionistic approach. It’s probably the most consistent performances of these sonatas to date, ranking up there with Wilhelm Kempff’s intimately raw playing of the cycle for DG (a personal favorite) and Rudolf Serkin’s muscular, extroverted recording on the CBS label. Perhaps a little more fierceness here and there, though, would not have been unwelcome.