Between them, Shostakovich and Prokofiev were the poster boys of Soviet-era music. During WWII the former’s Symphony Nos. 5 and 7 (“Leningrad”) were like the soundtracks to propaganda posters, filled with patriotic tunes and horrifying marches depicting the brutality of battle. The latter, however, was a bit more unfettered and experimental in his approach, probably because he wasn’t under the same crazy compulsion as the more popular Shostakovich to win Stalin’s approval and carry the banner of social realism to the ears of the masses.

Prokofiev’s Symphony No. 5, op. 100–which premiered in 1944 just as his countrymen were victorious at the River Vistula–commemorated a turning point for Russia. He completed the symphony at a Soviet Composers Union retreat, calling it “A symphony about the spirit of man”.

The symphony opens with an expansive theme, played by the flute and bassoon before being taken up by the strings. A second theme comes along and converges with the first, underlined by a soft melody. Then the movement erupts into a coda with a blaring wall of sound. The snappy Scherzo is vintage Prokofiev, an off-kilter dance that could have been filched from one of his ballets.

From there the symphony turns darker in the penultimate movement, culminating with a coda shared between the piccolos and string section. Shapes and gestures define the last movement until the clarinet chooses an original theme. With incredible power, the many themes of the entire symphony are extrapolated into a grandly blistering finale that absorbs and reconfigures everything that’s been heard up to that point.

Shortly after it premiered, the 5th was imported to America, where it was performed by the Boston Symphony and became an instant classic. Gramophone placed it at number 9 on their list of the 10 greatest symphonies, behind Aaron Copland’s 3rd Symphony and ahead of Shostakovich’s 10th. Szell’s recording with the Cleveland Orchestra, in a sealed album reissued from Columbia is a favorite for many listeners.

Vladimir Golschmann, with his “matinee-idol face” according to one contemporary, was one of the great proponents of modernist music. He conducted world premieres of Honegger, Falla and Milhaud’s Le Creation du Monde, among others, and did some of the finest recordings on record with the St. Louis Symphony Orchestra. With them on this album he tackles Shostakovich’s 1st Symphony.

Shostakovich was a child prodigy in the classic sense; for a time when he was a boy he played piano for silent films at a local theater in St. Petersburg (he was supposedly let go for laughing too much at Chaplin and Buster Keaton flicks). His 1st Symphony was completed when he was 18, his graduate piece for the Lenin Conservatory.

Mark Wigglesworth points to the work’s tension and sarcastic wit, its ping-ponging between nobility and banality that would be so characteristic of Shostakovich’s subsequent symphonies. The composer himself called it a “symphony grotesque”, which begins, in Stravinsky-inflected carnival-ese (it even includes a piano, just like Petruchka), but veers ever more Mahlerian as it goes along. Or, as Shostakovich put it, “It’s turning out pretty gloomy.” Schoenberg and Tchaikovsky can also be heard as serious influences. But what could be called the “Shostakovich Sound” is distinctive, if nascent, throughout. 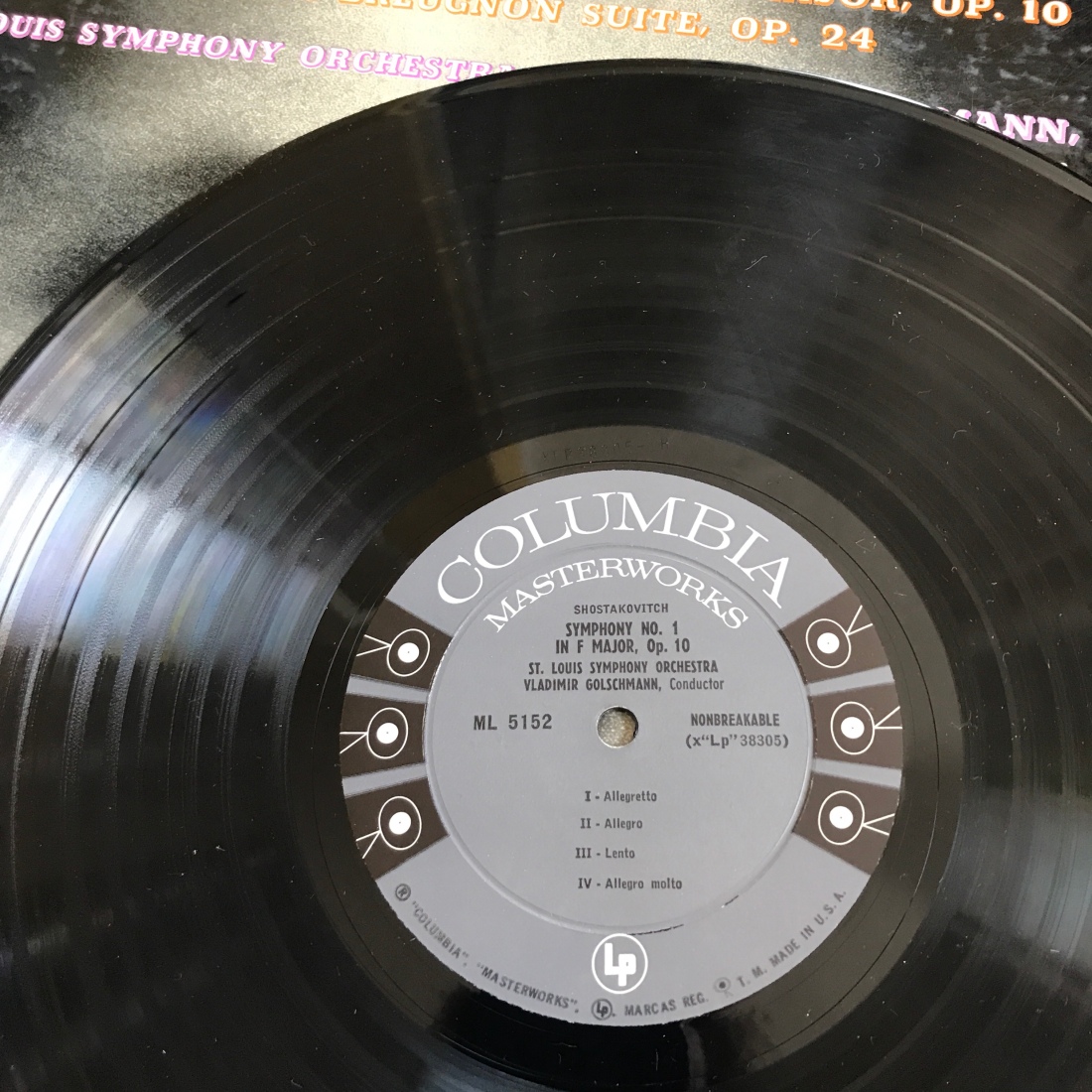 When the symphony premiered in 1926, Shostakovich became something like a living Soviet satellite overnight, and he was basically annexed by Stalin, used for propaganda, praised as the greatest Russian composer, persecuted mercilessly. After that premiere, conductors lined up to give national premieres: Toscanini, Bruno Walter, Otto Klemperer all waved their batons at the shy young man’s entrance onto the international stage.

Golschmann’s conducting is spontaneous and vital, drawing out Shostakovich’s modernist impulses. The large, somewhat unnerving portrait of an impassive woman with an electric gaze is a neat depiction of art in the USSR. Notably, Golschmann has signed this recording. Besides the Shostakovich, it includes Kabalevsky’s popular suite, from his opera of the same name.

The two piano concertos of Dmitri Shostakovich could be examples of what might be called Soviet Grotesque. Each veers from familiarly Shostakovichean brutality to near lullaby to drunken rondos, with undercurrents of the carnivalesque everywhere.

Composed in 1933 and 1957, respectively, there’s an obvious tonal shift between them for all the concertos’s similarities. The 1st bears some traces of the Soviet workshopping so disruptive to Shostakovich’s process, especially hearable in the overtly patriotic 5th and 7th Symphonies, with a trumpet soloist included, somewhat bizarrely. (At times much of Soviet music sounds like the cobbling together of ideological power symphonies by drab apparatchiks in sterile rooms). But in the 2nd Piano Concerto Shostakovich, freed from the more extreme censorship he’d been leashed with, channels a classical exuberance that had already crept out in works like the 9th Symphony.

And who better to play these concertos than Eugene List, who played the 1st Piano Concerto not once, not twice, but 173 times before this recording. That’s not a typo. List debuted the work and went on to solo with a pantheon of notable conductors: Stowkowski a couple of times, Bernstein, Klemperer, and on and on, in countries around the world.

His playing is simply topnotch and completely assured on this album from Westminster. As far as the the sleeve design goes — piano keys in slight disarray –it’s a fitting graphic to these chromatically rambunctious concertos. 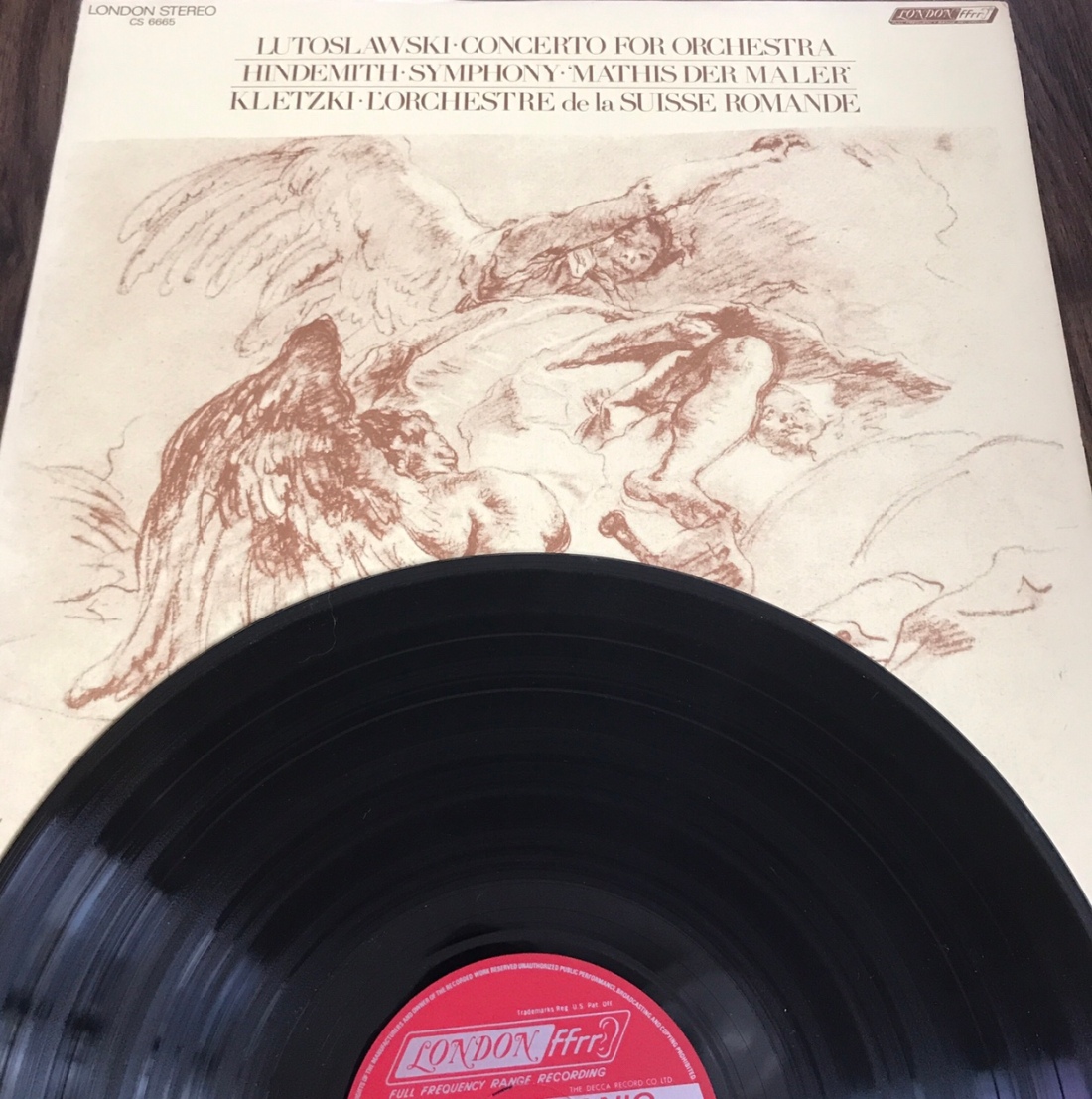 My episodic symbiosis with folk music.

After Chopin, Lutoslawski was possibly the most famous Polish composer, and certainly one of the titans of twentieth century music. Like Bartok’s 1943 Concerto for Orchestra, Lutoslawski’s, from 1950-’54, shows the elasticity of orchestral forms, with individual sections given solos. It’s scoring is similar, but the Concerto makes use of a wider variety of instruments, including a piano and a bell.

While Bartok parodied Shostakovich’s 7th Symphony in his Concerto, Lutoslawski celebrates his fellow Social Realist by inserting the “DSCH” monogram in musical language in the score. The 1st movement is a monumental symphonic spree of big climaxes and ear-splitting brass. Folk songs influence the following Capriccio Notturno E Arioso, with its forbidding calm, only to let loose in a trumpet fanfare before culminating in an introspective ppp marking (the quietest notation played even quieter).

Diminishing and thundering intermittently, the final movement starts with a passacaglia, and then increases in fierceness for the toccata. A soft chorale follows close on its heels before turning extroverted with a gigue-like ending that sounds like a collaboration between Penderecki and Handel.

Notably, Lutoslawski has signed the back of this copy, which appears on the London label. It’s a strong performance by Kletzki and the Suisse Romande. Included on the album is Paul Hindemith’s symphonic drama about the role of the artist in a totalitarian regime. Auspiciously, it premiered in Germany under the baton of Wilhelm Furtwangler, as a sort of teaser for his opera of the same name.

I can’t be reproached for avoiding that ugly phenomenon of our reality.

Perhaps no other composer’s music is so autobiographical as Shostakovich’s. (His era, covering the Russian Revolution, WWI, WWII and the Stalin nightmare, gave him a lot of fodder). And among his 15 symphonies, the Tenth might be his most personal.

Often, critics overlook Shosta’s modernist leanings, and instead claim that his works are just notated digs at Stalin, thus reducing him to the status of a political composer. The Tenth does bear some of this politicization, but it’s more of a picaresque symphony documenting the composer’s travails and transfigurations. Shosta inserts his initials, using the German transliteration, as a recurring theme in the work, at first haltingly and transposed, in the uncertain 1st movement.

The symphony changes tack for the Allegro, which is one of the most brutal things you’re ever likely to hear. (The composer’s friend and chronicler, Volkov, says that this movement is a portrait of Stalin’s reign). Stalin had just died before Shostakovich began the symphony, in 1953, and perhaps he felt he had some wiggle room to shy away from social realism and to approach his materials more metaphorically.

As the music continues through a slow third movement and into the Andante-Allegro, Shosta’s initials keep popping up, more and more directly, until they’re stated boldly and without a moment’s hesitation. At the dawn of a freer world, the composer is finally allowed some measure of the self-expression he had to conceal from the totalitarian regime.

Once again, Shosta shows why he was the USSR’s updated Franz Joseph Haydn, with intricate, tight orchestration (paraphrasing not a little from Gustave Mahler) and an almost classical finale that would surely have been condemned by the state. Haydn, yes, but with a lot more drums, dissonances and savagery.

Originally recorded in Europe in 1954, this re-issue presents a rarity: Shostakovich conducting one of his very own symphonies. 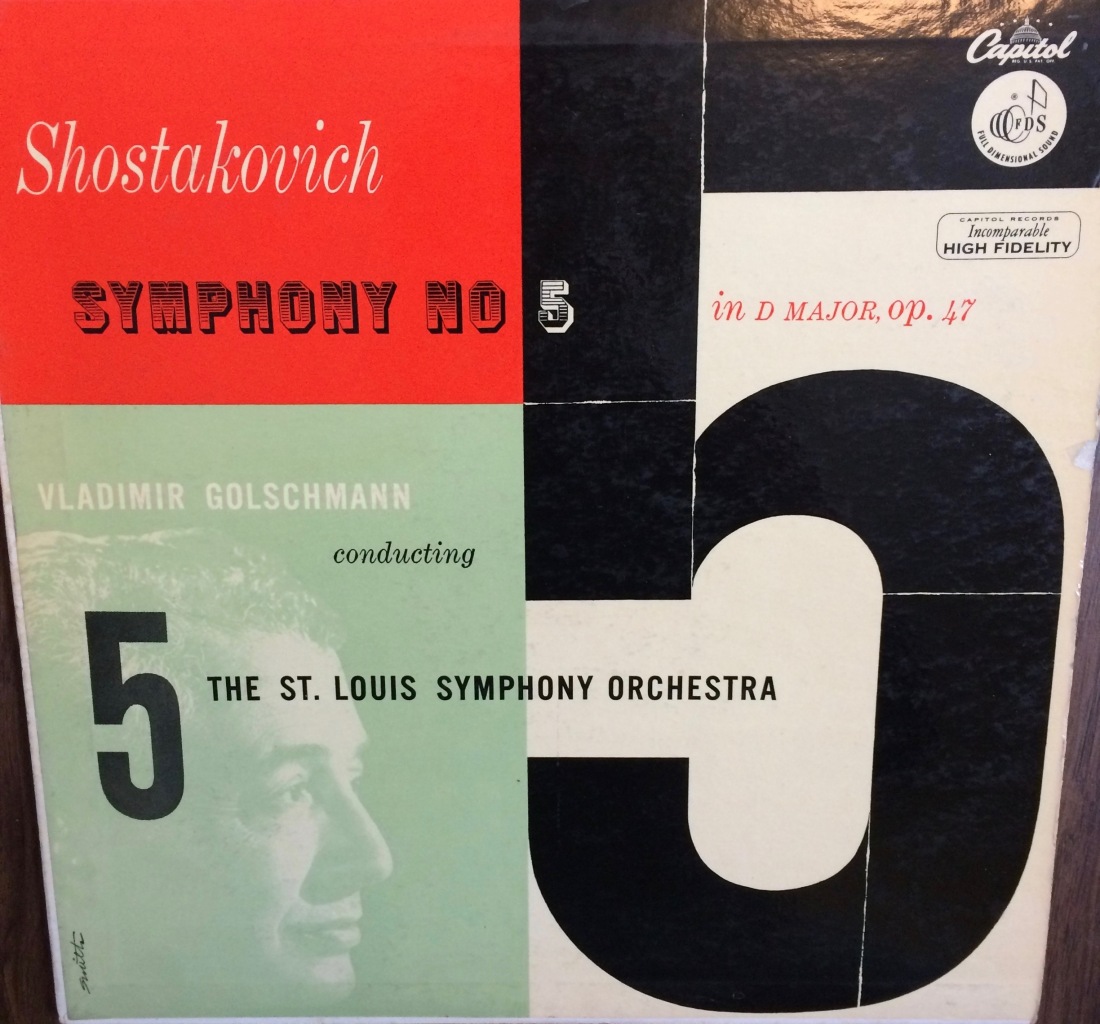 Nobody captured the katzenjammer of interior and external conflict like Dmitri Shostakovich. His milieu was incendiary: WWI, Stalinist purges, WWII, more Stalinist purges. Duality was hoisted on him: on the one side constrained by the Soviet Union’s artistic repression (if you weren’t into social realism you were blacklisted or worse), and on the other his pursuit of modernist forms of expression.

After the debut of his opera Lady Macbeth of Mtsensk was banned in 1936, he was publicly denounced, and he slept for days in the stairwell outside his apartment waiting to be taken by Soviet authorities for his dissident music-making.

The 5th Symphony was his apology for sidestepping Stalin’s favor, though with some  very subtle acts of subversion thrown in. It worked and he was installed as the de facto propagandist, with his 7th Symphony (“Leningrad”) becoming something of a rallying cry during WWII.

Yet everywhere in Shostakovich’s music there’s the purgatorial rage of a man stuck between his innate sense of cultural identity and what his country demanded of him. During the Col War, his music was a surprisingly huge draw in the US. When he finally arrived in America it was with a contingent of KGB operatives tailing him everywhere to make sure he wouldn’t defect to the enemy.

Vladimir Golschmann, a great champion of avant-garde composers, recorded this 5th for Capital Records, with the St. Louis Symphony Orchestra. It’s a sweeping performance that skimps on some of the more overt patriotic bombast.